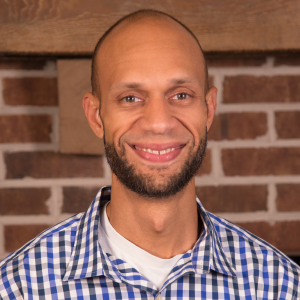 Howard Lee was born in 1981 and raised in Philadelphia. He is happily married to his first love, Eileen, has an amazing daughter, Mia, and resides locally in Collegeville. Howard and his family have attended The Village since 2001. In his downtime, Howard enjoys spending time with his family, carpentry projects, listening to a wide range of music, steak and seafood dinners, watching movies, and target practice. Howard is passionate about playing pranks, cracking Dad jokes and making people think.

Howard accepted Christ as his Savior as a young boy regularly attending Catholic school and church with his family and grandparents. Howard graduated from Orleans Technical College with a Carpentry diploma. He has a background in project management, remodeling, estimating, code compliance and workplace safety. Howard has been on staff since 2018. He manages the upkeep of the building and grounds, custodial work, facility use and also coordinates work with various outside subcontractors. Howard really enjoys the diversity of his responsibilities and the daily interaction with a great group of coworkers!

One of his favorite sayings: “If you can’t preach like Peter and if you can’t pray like Paul, you can tell the love of Jesus and say “He died for all.””